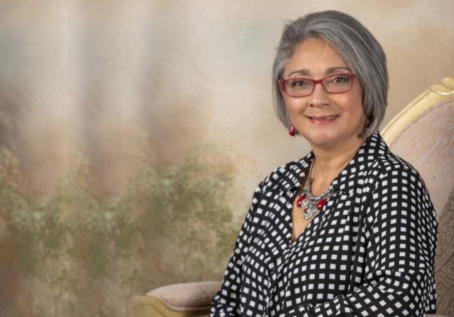 Alma Davis is a minister of the gospel of Jesus Christ who currently resides in the United States  with her husband, Dr Curt Davis. As a small child Alma had a great love for the United States and told her family that someday she would live there. She grew up in the Republic of Panama in the city of Puerto Armuelles. She is the youngest of four children of a single working mother who provided well for her family under extreme
circumstances.

When she was grown Alma moved to David, a city in the province of Chiriqui in western Panama. It was here that she received Jesus as her Savior. But then a series of traumatic events took place which left her paralyzed from the waist down. After unsuccessful surgery on her lower back, she again became bed ridden with paralysis. She required twenty four hour care for a period of four months. During special meetings at a local church by an American evangelist, Alma received prayer and God healed her of severe scoliosis, sciatica, and a tumor in her coycyx as big as a lemon disappeared. Immediately all the pain was gone and she resumed normal activities which she enjoys this day.

After her healing, Alma began sharing her faith in Christ with  whomsoever she met. Many came to Jesus as she witnessed daily in the homes and on the streets of David. She preached publicly in the town square of David alone with nothing but her Bible. And then she would carry people in a cattle truck to her church several times a week. Many souls were won to Christ.

Then the Lord opened the door for Alma to preach the good news of Christ on a secular radio station that reached most of the country. This daily brodcast continued for three years and many churches opened to her ministry. She became a well know evangelist and held many revivals, marriage seminars, youth meetings and pastors’ retreats. Invitations came from churches large and small in the mountains and the villages as well as the large cities.

While active in the ministry Alma continued her education for three and one half years in the Bible Institute of David.